You can buy the archive of STREAMING SHOW!until 21st Oct.

皆様のおかげでほんまにほんまに！最高すぎるライブができました！！！！
it was really   super SPECIAL SHOW!!! we really want YOU to SEE IT!!

You can buy the archive of Afrirampo overseas distribution live on TwitCasting until October 21st! ️ If you missed it, check it out 👁💕👍✨

●YOU CAN SEE HOW TO BUY THE TICKET!!in ENGLISH!!●

we are collecting donations HERE!
paypal.me/afrirampo 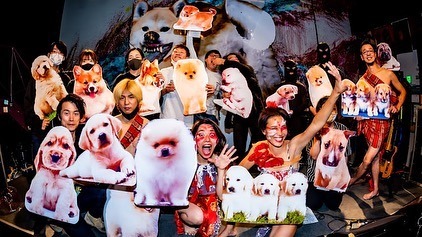 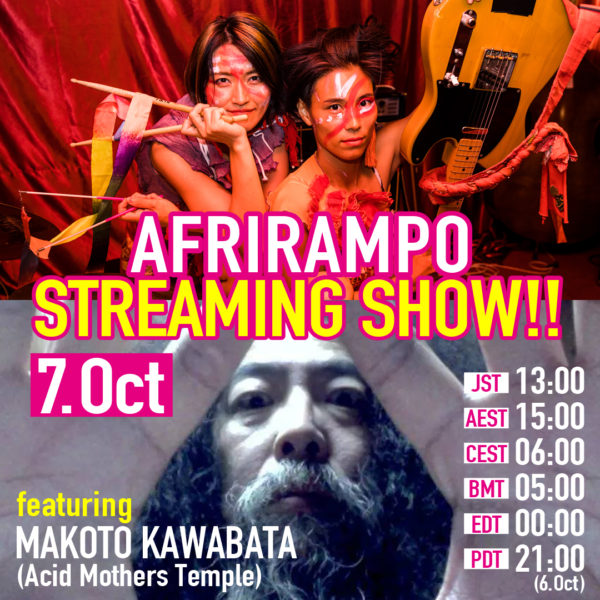 
Kawabata Makoto
Guitarist and multi-instrumentalist. Leader of the psychedelic rock band Acid Mothers Temple.
While he’s best known for his earsplitting, speed guru guitar heroics with AMT, he’s also the founder of his own school of ecstatic guitar drone using bowing and glissando techniques.
Kawabata first started releasing works for electronics and homemade instruments in 1978. Since then his activities have been almost too wideranging to grasp: he has formed multiple units, released a plenitude of albums on labels all over the world, toured extensively in Europe, the US and Asia.
His collaborations truly span multiple genres. He has played with psychedelic originators like Gong, Guru Guru, Silver Apples, Nik Turner, Damo Suzuki, Träd Gräs och Stenar, and Geoff Leigh; with avant-garde giants including Keiji Haino, Tatsuya Yoshida, Charles Hayward, Jean-François Pauvros, Richard Youngs and Tatsuya Nakatani; and with Occitan trad musicians including Rosina de Peira, Marc Perrone, Andre Minvielle, and Beatritz.
In 2019 he began to perform and create new works for modular synthesizers, a return to the electronic music that was the origin point of his musical career. He has also worked as a producer and mixing engineer for many bands and musicians, including Fursaxa, maquiladora, Hibushibire, and squimaoto.
Kawabata has always supervised the artwork for our album releases and designed our T-shirts, etc. In 2020, Kawabata has returned to painting (an activity I am dubbing “GAGYO”) and he has finally started creating mature artworks.www.acidmothers.comkawabata-makoto.bandcamp.comhttps://www.instagram.com/speedguru666/
AcidMothersTemple | Acid Mothers Temple “Soul Collective” OFFICIAL SITE
Acid Mothers Temple Soul Collective
acidmothers.com
ツイート
一覧へ